Like many animal lovers, my first reaction was outrage at the senseless death of Cecil the lion by Walter Palmer. I let my first draft post that reflected my outrage subside into thought – I just couldn’t understand why a successful American dentist would feel the need to take the life of a beautiful African creature. Then I learned that he has done it many times in the past and that big-game hunting has supported the imperiled species to be taken to the brink of extinction, where the lion population has decreased from over 100,000 in the early 1990s to between 15,000-47,000 currently (ref: Wikipedia). The justification is that “trophy hunting” is a smaller factor than poaching. To me that is a specious argument, since it exacerbates the rapid decline of these magnificent creatures. Paying $50,000 to slaughter, behead, and skin a lion is unfathomable and should be condemned.

Our society has moved beyond this! We should not tolerate this. 2000 years ago, hunting and killing humans was considered acceptable. Army’s would plunder captured villages, beheading humans and displaying their heads on spikes or hanging them from walls. As our society matured and became more civilized, this was condemned and is considered abhorrent. ISIS still maintains this practice in their conquered territory – they considered conquered people trophies and not deserving of any compassion.
Are big-game trophy hunters, like Walter Palmer, very different from them? Future generations of humanity will look back on the barbaric practice of trophy hunting with disgust, just as we should now.

So, what should we do?
1) Clearly, the first step if for all civilized countries (led by the US) should put in place a permanent ban on Trophy Hunting; no part of a threatened or endangered species should be allowed to be brought back into the US or any other country.
2) Social pressure, like that shown to Walter Palmer, must be ferocious. We should shun anyone who does Trophy Hunting. Peer pressure should be massive. They should understand that this is as unacceptable as being taken to a remote location to hunt a human.
3) Economic stick. The countries that allow Trophy Hunting should face economic sanctions if they continue to do so. These include not just Zimbabwe, but also South Africa, Namibia, etc.
4) Economic carrot. We need to support non-destructive ways to preserve wildlife and their environments in the affected countries. I am a photographer and love photographing animals in their natural habitat. Photo trips like these are expensive and support the local economy. I also contribute to wildlife conservation. As a society, we need to make sure that preserving these natural habitats and their wild inhabitants is a high priority.

Let’s make sure that Cecil’s senseless killing was not in vain. #CecilMattered

I recently participated in the Clinton Global Initiative that was held in Chicago on June 7th and 8th. It really was a fascinating event in many respects. The agenda can be found at: http://www.cgiamerica.org/2012/agenda/. The basic thread was what specifically can be done to put America back to work. There were a slew of great speakers and breakouts. I was invited to help guide the Entrepreneurship sessions. 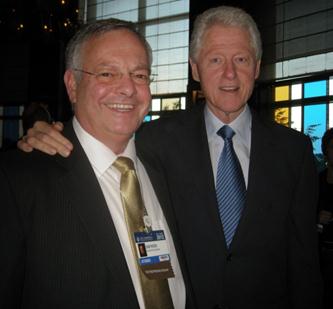 It is impressive to see what former President Clinton can get companies and individuals to do  there were specific commitments to create programs, hire returning veterans, and great discussions and commentary about what has gone wrong and what can be done.

The only downside for me was the seeming confusion between lending and equity. There was much discussion about helping small business and a lot of confusion about loans as investment. We angels have our work cut out for us.

A while ago, I blogged on the decline of Microsoft (http://blog.drosenassoc.com/?p=42). Lately, many people have asked me about the current debt crisis, followed by the S&P downgrade of US credit. There are striking similarities.

Until about 20 years ago, for over 200 years, the US has been in a building mode. We have created the economic engine that fueled world growth, established an education system that was the envy of the world, a climate and legal structure that allowed great entrepreneurs to create companies that were the envy of the world. Even when faced with extraordinary challenges, like the great depression or the world wars, we were able to overcome these challenges.

Just as with businesses, in times of plenty, it is incumbent upon a business (or society) to put aside for the lean times. (I won’t cite Biblical references here, but they are obvious.) Since WWII, we have had numerous times of plenty. In the late 40s and early 50s, as a county we hugely increased our infrastructure (think the Interstate highways), invested heavily in universities (which have been the envy of the world and fueled much of our entrepreneurial growth), and through the concomitant consumer spending, created a surge in our standard of living. Many of these improvements allowed us to weather some of the storms that followed. With confidence, we strode into space  landing on the moon, created the Internet and countless other platforms that fuel global innovation.

But, our generation seems to have lost sight of what is really important. We have spent with reckless abandon. We have made poor strategic decisions. We, as a society and management team (the political leaders we elected) made bad strategic decisions. If we were a company, our stock would be trading at record lows and our investors would be clamoring for a change of leadership. But we have lacked the will and foresight, not to mention the systemic governance issues that prevent truly innovative leadership from coming to power. We need to make changes in the way we are run.

We are negligent for not having done this in the US. And, despite politicians’ desire for reelection demanding that they give us a silver bullet, there is no silver bullet! It took 20 years to make this problem  20 years of lack of political will to curb spending and live within our means. But, just as I suggested with Microsoft, there are reasonable long-term solutions.

From my point of view, the solution is to unleash the entrepreneurial spirit that is embodied in the startups. This is where the economic growth, job creation, and invigoration of our society can come from. In a very specific sense, legislation before congress, like Senate Bill S256 “American Opportunity Act of 2011” (http://www.opencongress.org/bill/112-s256/text), sponsored by Senators Mark Pryor and Scott Brown that gives a 25% tax credit to angel investors; when similar legislation was enacted in other places, dramatic increases in angel investing and increased tax revenues have resulted. Another example are the proposed changes to IRS Section 1202, exemption for gains on qualified small business gains, which will give 100% exclusion of capital gains for angel investment.

These actions will spur angel investing in those high-growth startups that will ultimately move the economy. While modest in cost, they could be large in impact.

In my lifetime, I have witnessed the transformation of communication. When my grandparents were born, electronic communication meant telegrams. A couple of generations earlier, sending a letter from new York to san Francisco required writing a letter, getting it on a ship, and having it sail around South America, taking months. In rapid succession, we deployed railroads, telephones, highways/cars, airlines, data networks, and the Internet. The result is we can now send the same information that required months in less than the blink of an eye.

But, one aspect of this communication remained the same – you needed to know who you were communicating with and their address.

In the last few years, this has all changed! We can now communicate, individually or to a group, with people who we don’t know. The rise of social networks allows people to find others that they don’t know, but with whom they share an interest  around the world! This has changed the definition of community. And the definition of “friend.”

I think it will take many years to understand all of the impacts of this profound change in communication.

At the tip of the iceberg, we see the revolts in the Arab world in North Africa, where dissenters used Facebook to organize and communicate.

I saw the precursor of this in Eastern Europe and Russia (actually the Soviet Union) in the late 1980s. When visiting frequently on business, some of my colleagues would ask me to bring blank video tapes (pre-recorded video tapes were seized on entry!). I didn’t understand this at first, until I was taken to a “secret” video exchange market, where you would bring a blank video tape and pay some money to get a current-run Western movie. It gave the populace the ability to see Western culture, values, etc. I believe it was a contributing factor in the changes that later swept that part of the world. The Internet and Facebook is a much more potent force for knowledge, freedom, and understanding.

We live in a time of sweeping change.

Moammar Gadhafi announced at his press conference that the youth in Libya had been using drugs. He is completely right! Their drug of choice is freedom. And the second is hope. And the third is community/networks. We welcome you to the 21st Century. May freedom spread everyone.

on investing and the future of technology